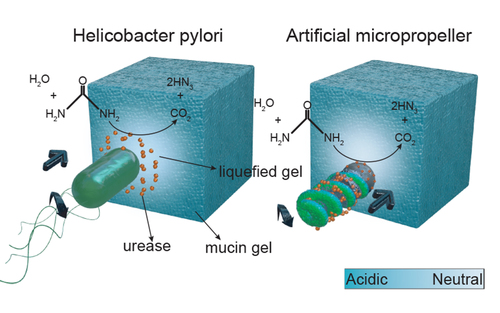 Enzymatically active biomimetic micropropellers for the penetration of mucin gels

Science Advances, 1(11):e1500501, December 2015 (article)
Abstract
In the body, mucus provides an important defense mechanism by limiting the penetration of pathogens. It is therefore also a major obstacle for the efficient delivery of particle-based drug carriers. The acidic stomach lining in particular is difficult to overcome because mucin glycoproteins form viscoelastic gels under acidic conditions. The bacterium Helicobacter pylori has developed a strategy to overcome the mucus barrier by producing the enzyme urease, which locally raises the pH and consequently liquefies the mucus. This allows the bacteria to swim through mucus and to reach the epithelial surface. We present an artificial system of reactive magnetic micropropellers that mimic this strategy to move through gastric mucin gels by making use of surface-immobilized urease. The results demonstrate the validity of this biomimetic approach to penetrate biological gels, and show that externally propelled microstructures can actively and reversibly manipulate the physical state of their surroundings, suggesting that such particles could potentially penetrate native mucus. 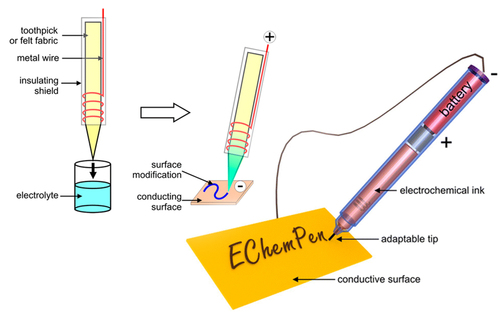 The EChemPen: A Guiding Hand To Learn Electrochemical Surface Modifications

J. of Chem. Ed., 92(10):1700-1704, September 2015 (article)
Abstract
The Electrochemical Pen (EChemPen) was developed as an attractive tool for learning electrochemistry. The fabrication, principle, and operation of the EChemPen are simple and can be easily performed by students in practical classes. It is based on a regular fountain pen principle, where the electrolytic solution is dispensed at a tip to locally modify a conductive surface by triggering a localized electrochemical reaction. Three simple model reactions were chosen to demonstrate the versatility of the EChemPen for teaching various electrochemical processes. We describe first the reversible writing/erasing of metal letters, then the electrodeposition of a black conducting polymer "ink", and finally the colorful writings that can be generated by titanium anodization and that can be controlled by the applied potential. These entertaining and didactic experiments are adapted for teaching undergraduate students that start to study electrochemistry by means of surface modification reactions.

Nano Letters, 15(7):4412-4416, June 2015 (article)
Abstract
Locomotion in fluids at the nanoscale is dominated by viscous drag. One efficient propulsion scheme is to use a weak rotating magnetic field that drives a chiral object. Froth bacterial flagella to artificial drills, the corkscrew is a universally useful chiral shape for propulsion in viscous environments. Externally powered magnetic micro- and nanomotors have been recently developed that allow for precise fuel-free propulsion in complex media. Here, we combine analytical and numerical theory with experiments on nanostructured screw-propellers to show that the optimal length is surprisingly short only about one helical turn, which is shorter than most of the structures in use to date. The results have important implications for the design of artificial actuated nano- and micropropellers and can dramatically reduce fabrication times, while ensuring optimal performance. 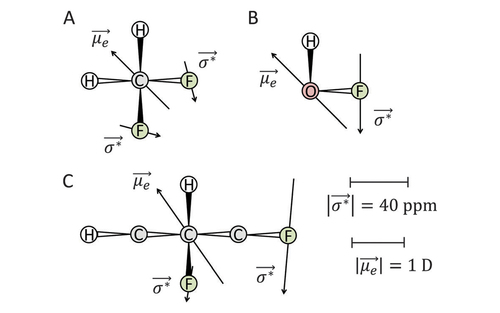 Phys. Chem. Chem. Phys., 17(35):22642-22651, May 2015 (article)
Abstract
Two recently predicted nuclear magnetic resonance effects, the chirality-induced rotating electric polarization and the oscillating magnetization, are examined for several experimentally available chiral molecules. We discuss in detail the requirements for experimental detection of chirality-sensitive NMR effects of the studied molecules. These requirements are related to two parameters: the shielding polarizability and the antisymmetric part of the nuclear magnetic shielding tensor. The dominant second contribution has been computed for small molecules at the coupled cluster and density functional theory levels. It was found that DFT calculations using the KT2 functional and the aug-cc-pCVTZ basis set adequately reproduce the CCSD(T) values obtained with the same basis set. The largest values of parameters, thus most promising from the experimental point of view, were obtained for the fluorine nuclei in 1,3-difluorocyclopropene and 1,3-diphenyl-2-fluoro-3-trifluoromethylcyclopropene. 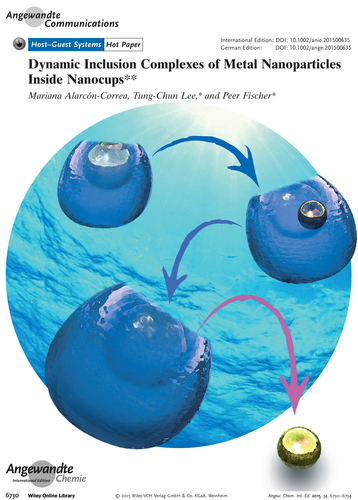 Angew. Chem. Int. Ed., 54(23):6730-6734, May 2015, Featured cover article. (article)
Abstract
Host-guest inclusion complexes are abundant in molecular systems and of fundamental importance in living organisms. Realizing a colloidal analogue of a molecular dynamic inclusion complex is challenging because inorganic nanoparticles (NPs) with a well-defined cavity and portal are difficult to synthesize in high yield and with good structural fidelity. Herein, a generic strategy towards the fabrication of dynamic 1: 1 inclusion complexes of metal nanoparticles inside oxide nanocups with high yield (> 70%) and regiospecificity (> 90%) by means of a reactive double Janus nanoparticle intermediate is reported. Experimental evidence confirms that the inclusion complexes are formed by a kinetically controlled mechanism involving a delicate interplay between bipolar galvanic corrosion and alloying-dealloying oxidation. Release of the NP guest from the nanocups can be efficiently triggered by an external stimulus. Featured cover article. 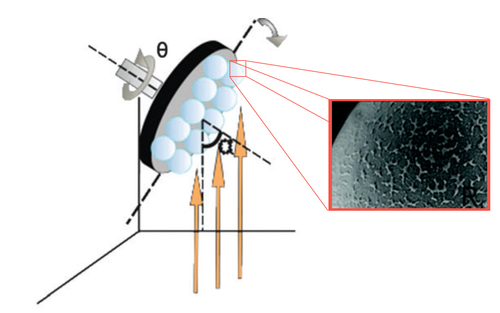 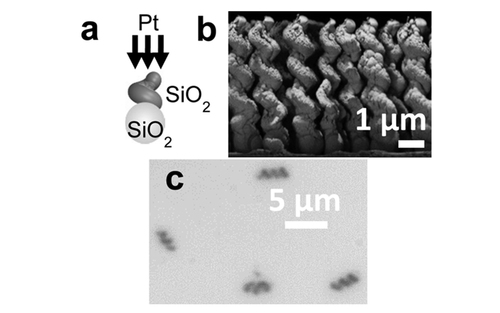 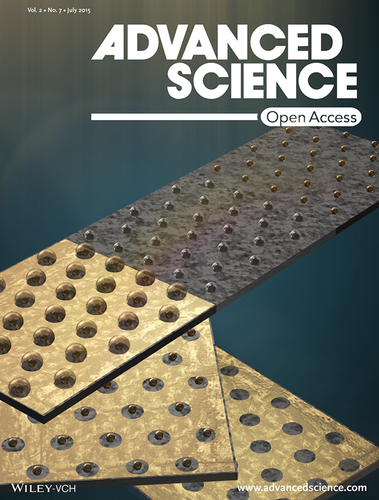 Adv. Science, 2(7):1500016, 2015, Featured cover article. (article)
Abstract
A parallel nanolithographic patterning method is presented that can be used to obtain arrays of multifunctional nanoparticles. These patterns can simply be converted into a variety of secondary nanopatterns that are useful for nanolithographic imprint, plasmonic, and etch-mask applications. 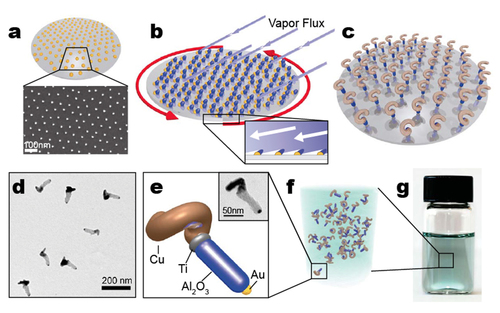 NATURE MATERIALS, 12(9):802-807, 2013, Max Planck Press Release. (article)
Abstract
Tuning the optical(1,2), electromagnetic(3,4) and mechanical properties of a material requires simultaneous control over its composition and shape(5). This is particularly challenging for complex structures at the nanoscale because surface-energy minimization generally causes small structures to be highly symmetric(5). Here we combine low-temperature shadow deposition with nanoscale patterning to realize nanocolloids with anisotropic three-dimensional shapes, feature sizes down to 20 nm and a wide choice of materials. We demonstrate the versatility of the fabrication scheme by growing three-dimensional hybrid nanostructures that contain several functional materials with the lowest possible symmetry, and by fabricating hundreds of billions of plasmonic nanohelices, which we use as chiral metafluids with record circular dichroism and tunable chiroptical properties. 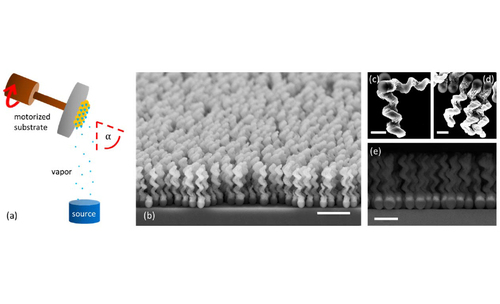 Chiral Colloidal Molecules And Observation of The Propeller Effect

JOURNAL OF THE AMERICAN CHEMICAL SOCIETY, 135(33):12353-12359, 2013 (article)
Abstract
Chiral molecules play an important role in biological and chemical processes, but physical effects due to their symmetry-breaking are generally weak. Several physical chiral separation schemes which could potentially be useful, including the propeller effect, have therefore not yet been demonstrated at the molecular scale. However, it has been proposed that complex nonspherical colloidal particles could act as ``colloidal molecules{''} in mesoscopic model systems to permit the visualization of molecular phenomena that are otherwise difficult to observe. Unfortunately, it is difficult to synthesize such colloids because surface minimization generally favors the growth of symmetric particles. Here we demonstrate the production of large numbers of complex colloids with glancing angle physical vapor deposition. We use chiral colloids to demonstrate the Baranova and Zel'dovich (Baranova, N. B.; Zel'dovich, B. Y. Chem. Phys. Lett. 1978, 57, 435) propeller effect: the separation of a racemic mixture by application of a rotating field that couples to the dipole moment of the enantiomers and screw propels them in opposite directions. The handedness of the colloidal suspensions is monitored with circular differential light scattering. An exact solution for the colloid's propulsion is derived, and comparisons between the colloidal system and the corresponding effect at the molecular scale are made. 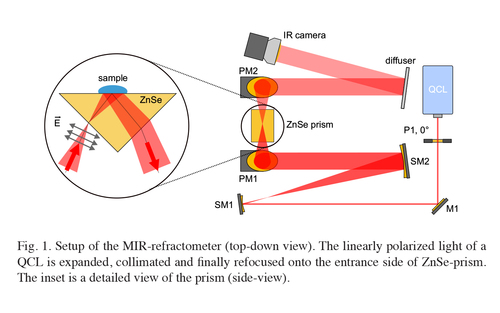 OPTICS EXPRESS, 21(22):25643-25654, 2013 (article)
Abstract
We record vibrational spectra with two indirect schemes that depend on the real part of the index of refraction: mid-infrared refractometry and photothermal spectroscopy. In the former, a quantum cascade laser (QCL) spot is imaged to determine the angles of total internal reflection, which yields the absorption line via a beam profile analysis. In the photothermal measurements, a tunable QCL excites vibrational resonances of a molecular monolayer, which heats the surrounding medium and changes its refractive index. This is observed with a probe laser in the visible. Sub-monolayer sensitivities are demonstrated. (C) 2013 Optical Society of America 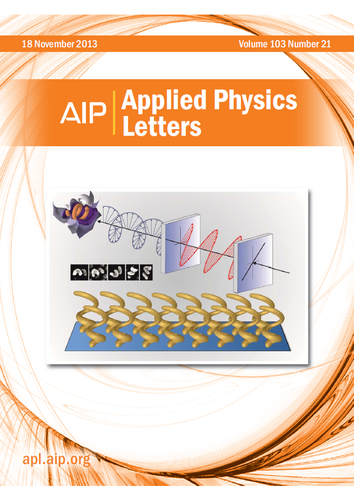 APPLIED PHYSICS LETTERS, 103(21), 2013, Featured cover article. (article)
Abstract
Plasmonic nanohelix arrays are shown to interact with electromagnetic fields in ways not typically seen with ordinary matter. Chiral metamaterials (CMMs) with feature sizes small with respect to the wavelength of visible light are a promising route to experimentally achieve such phenomena as negative refraction without the need for simultaneously negative e and mu. Here we not only show that giant circular dichroism in the visible is achievable with hexagonally arranged plasmonic nanohelix arrays, but that we can precisely tune the optical activity via morphology and lattice spacing. The discrete dipole approximation is implemented to support experimental data. (C) 2013 AIP Publishing LLC. 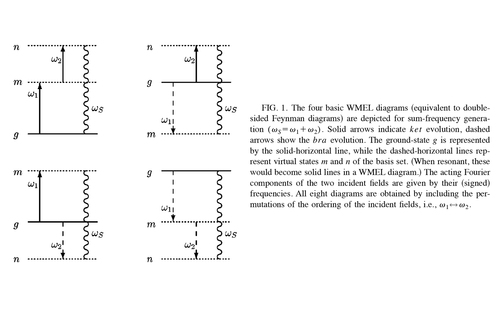 PHYSICAL REVIEW A, 64(5), 2001 (article)
Abstract
The second-order nonlinear optical susceptibility, in the electric dipole approximation, is only nonvanishing for materials that are noncentrosymmetric. Should the medium be isotropic, then only a chiral system. such as an optically active liquid, satisfies this symmetry requirement. We derive the quantum-mechanical form of the isotropic component of the sum- and difference-frequency susceptibility and discuss its unusual spectral properties. We show that any coherent second-order nonlinear optical process in a system of randomly oriented molecules requires the medium to be chiral. and the incident frequencies to be different and nonzero. Furthermore, a minimum of two nondegenerate excited molecular states are needed for the isotropic part of the susceptibility to be nonvanishing. The rotationally invariant susceptibility is zero in the static field limit and shows exceptionally sensitive resonance and dephasing effects that are particular to chiral centers. 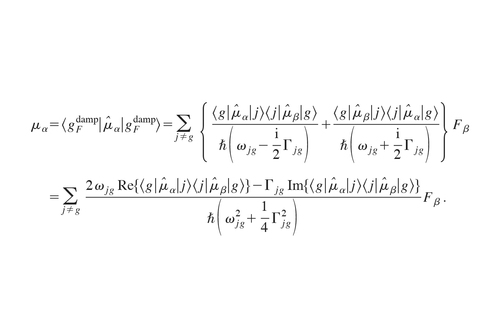 Reply to “Comment on ‘Phenomenological damping in optical response tensors’”

PHYSICAL REVIEW A, 63(4), 2001 (article)
Abstract
We show that damping factors must not be incorporated in the perturbation of the ground state by a static electric field. If they are included, as in the theory of Stedman et al. {[}preceding Comment. Phys. Rev. A 63, 047801 (2001)], then there would be an electric dipole in the y direction induced in a hydrogen atom in the M-s = + 1/2 state by a static electric field in the x direction. Such a dipole is excluded by symmetry.

Scalable Fabrication of Molybdenum Disulfide Nanostructures and their Assembly