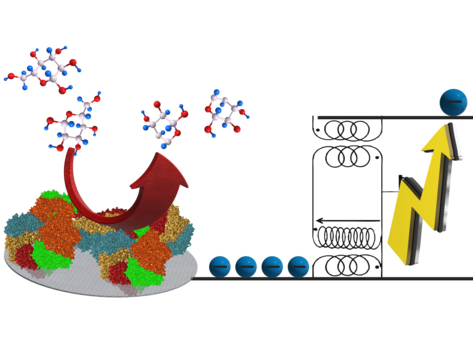 A boost for biofuel cells

In chemistry, a reaction is spontaneous when it does not need the addition of an external energy input. How much energy is released in a reaction is dictated by the laws of thermodynamics. In the case of the spontaneous reactions that occur in the human body this is often not enough to power medical implants. Now, scientists at the Max Planck Institute for Intelligent Systems in Stuttgart, together with an international team of researchers, found a way to boost the energy output by storing and bundling the energy of many spontaneous enzyme reactions. The work is published in the journal Nature Communications and shows how abundant, simple enzyme reactions can be used to power energy-hungry reactions and electronic devices.

Stuttgart – Chemical reactions in which electrons are released can be used to generate electricity. In order to power future medical implants, biofuel cells are being developed, where enzymes, derived from living organisms, are employed to liberate electrons, for instance during the oxidation of sugar molecules. An important general problem is that the energy and voltage of the electrons that can be generated in a biofuel cell is rather small. While it is easy in a household device to connect several batteries in series to boost the voltage, this is not possible in the human body, as each biofuel cell is necessarily immersed in the same fluid at the same electrical potential so that voltages cannot be added up. This means that biofuel cells can presently in most of the cases only generate much less than 1 Volt, which severely limits practical applications.

This is not only a matter of engineering, but the fundamental laws of thermodynamics also put limitations on the energy that can be released in the enzymatic reactions. The challenge is therefore to develop new approaches for biofuel cells that can circumvent these constraints.

Researchers from the University of Bordeaux, the French CNRS, the University of Stuttgart and the Max Planck Institute for Intelligent Systems (MPI-IS) have now found a clever way to overcome the restrictions imposed by thermodynamics. They managed to temporarily store the electrons released when glucose is oxidized and to use some of this energy to autonomously boost the voltage of the remaining electrons. “No outside power is needed”, says Emmanuel Suraniti, postdoctoral fellow at the MPI-IS and first author of the study that is published in Nature Communications.

The principle of operation is very general and relies in storing the energy of the electrons temporarily in an electromagnetic field. To achieve this, a small electronic circuit – powered by the chemical reaction itself – is integrated into the biofuel cell in order to harvest the electricity and boost the voltage. Thus, the concept makes it possible to turn simple biomolecules into high-energy fuels.

“Converting the starting compounds into electrons of high energy via the biofuel cell opens up completely new possibilities to power electronics and to synthesize important chemicals”, says Peer Fischer, who heads the Micro, Nano and Molecular Systems lab at the Max Planck Institute for Intelligent Systems and who is a Professor of Physical Chemistry at the University of Stuttgart. “It is now possible to use the oxidation of abundant low-energy molecules to synthesize precious molecules that need higher energies to form, which is a completely new concept.”

Apart from biofuel cells that generate useful voltages, the researchers envision reactions inside the body where the oxidation of glucose drives the synthesis of large drug molecules – something that thermodynamics would otherwise not allow, but which becomes possible in what may well be a first demonstration of the direct integration of electronics during a chemical reaction.

The full scientific paper can be found here:

Prof. Dr. Peer Fischer heads the Micro, Nano and Molecular Systems Lab at the Max Planck Institute for Intelligent Systems in Stuttgart and he is a Professor of Physical Chemistry at the University of Stuttgart. Fischer received a BSc. degree in Physics from Imperial College London and a Ph.D. from the University of Cambridge. He was a visiting scientist at the European Laboratory for Nonlinear Spectroscopy in Florence (LENS) and a NATO Postdoctoral Fellow at Cornell University, before joining the Rowland Institute at Harvard University. At Harvard he held a Rowland Junior Research Fellowship and directed an interdisciplinary research lab for five years. In 2011 he moved his lab to the Max-Planck-Institute for Intelligent Systems in Stuttgart, where he is an Independent Group Leader. Peer

Fischer is a member of the Max Planck – Ecole Polytechnique Fédérale de Lausanne (EPFL) Center for Molecular Nanoscience and Technology as well as of the research network on Learning Systems with ETH Zürich. In 2009 he received a Fraunhofer Attract award and in 2011 he was awarded an ERC starting grant. In 2016, he received the World Technology Award. It is awarded for "innovative work with most likely long-term significance" for humanity. The category in which Fischer won: "IT Hardware". In 2018, Fischer was awarded an ERC Advanced Grant.