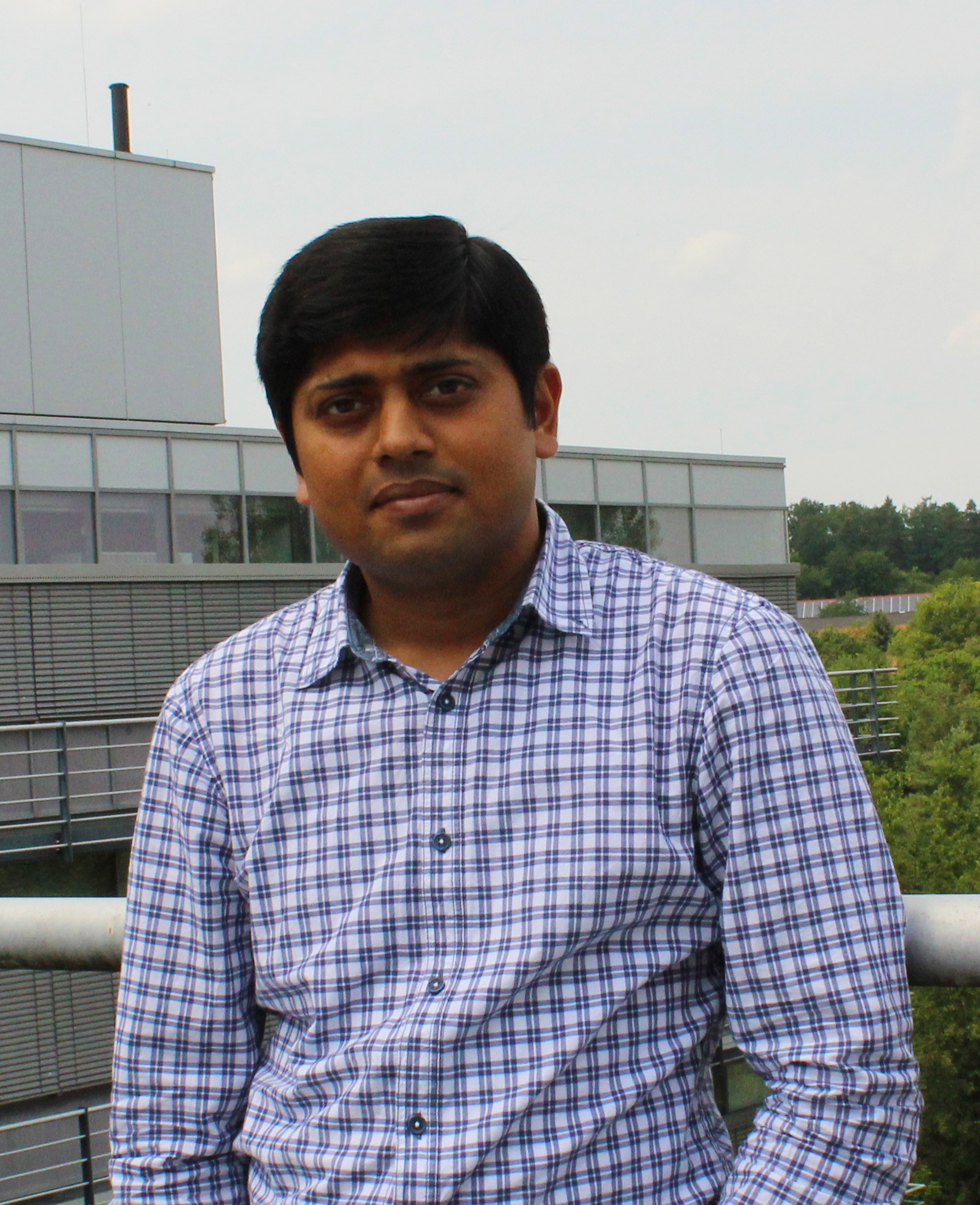 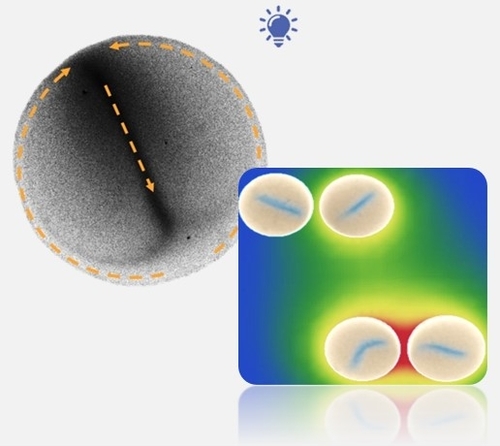 Nature Communications, 11(2210), May 2020 (article)
Abstract
Symmetry breaking and the emergence of self-organized patterns is the hallmark of com- plexity. Here, we demonstrate that a sessile drop, containing titania powder particles with negligible self-propulsion, exhibits a transition to collective motion leading to self-organized ﬂow patterns. This phenomenology emerges through a novel mechanism involving the interplay between the chemical activity of the photocatalytic particles, which induces Mar- angoni stresses at the liquid–liquid interface, and the geometrical conﬁnement provided by the drop. The response of the interface to the chemical activity of the particles is the source of a signiﬁcantly ampliﬁed hydrodynamic ﬂow within the drop, which moves the particles. Furthermore, in ensembles of such active drops long-ranged ordering of the ﬂow patterns within the drops is observed. We show that the ordering is dictated by a chemical com- munication between drops, i.e., an alignment of the ﬂow patterns is induced by the gradients of the chemicals emanating from the active particles, rather than by hydrodynamic interactions.

Adv. Opt. Mat., March 2020 (article)
Abstract
Traditional photodetectors generally show a unipolar photocurrent response when illuminated with light of wavelength equal or shorter than the optical bandgap. Here, we report that a thin film of gallium oxide (GO) decorated with plasmonic nanoparticles, surprisingly, exhibits a change in the polarity of the photocurrent for different UV bands. Silver (Ag) nanoparticles are vacuum-deposited onto β-Ga2O3 and the AgNP@GO thin films show a record responsivity of 250 A/W, which significantly outperforms bare GO planar photodetectors. The photoresponsivity reverses sign from +157 µA/W in the UV-C band under unbiased operation to -353 µA/W in the UV-A band. The current reversal is rationalized by considering the charge dynamics stemming from hot electrons generated when the incident light excites a local surface plasmon resonance (LSPR) in the Ag nanoparticles. The Ag nanoparticles improve the external quantum efficiency and detectivity by nearly one order of magnitude with high values of 1.2×105 and 3.4×1014 Jones, respectively. This plasmon-enhanced solar blind GO detector allows UV regions to be spectrally distinguished, which is useful for the development of sensitive dynamic imaging photodetectors. 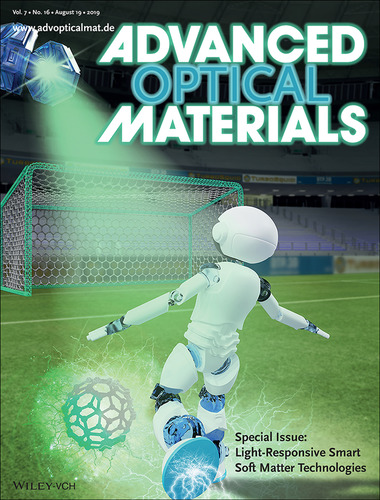 Adv. Opt. Mat., 7, pages: 1900370, August 2019 (article)
Abstract
Mobile microscale devices and microrobots can be powered by catalytic reactions (chemical micromotors) or by external fields. This report is focused on the role of light as a versatile means for wirelessly powering and controlling such microdevices. Recent advances in the development of autonomous micromotors are discussed, where light permits their actuation with unprecedented control and thereby enables advances in the field of active matter. In addition, structuring the light field is a new means to drive soft microrobots that are based on (photo‐) responsive polymers. The behavior of the two main classes of thermo‐ and photoresponsive polymers adopted in microrobotics (poly(N‐isopropylacrylamide) and liquid‐crystal elastomers) is analyzed, and recent applications are reported. The advantages and limitations of controlling micromotors and microrobots by light are reviewed, and some of the remaining challenges in the development of novel photo‐active materials for micromotors and microrobots are discussed. 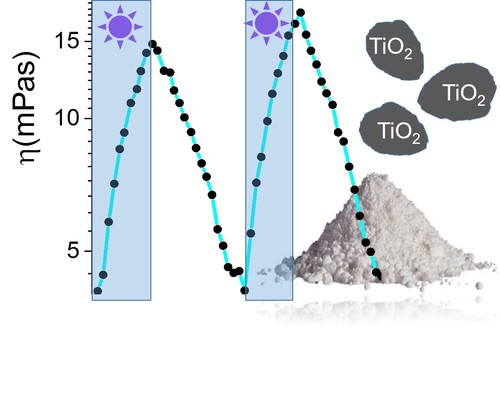 Adv. Mat., (1807382), Febuary 2019 (article)
Abstract
The rheological properties of a colloidal suspension are a function of the concentration of the colloids and their interactions. While suspensions of passive colloids are well studied and have been shown to form crystals, gels, and glasses, examples of energy‐consuming “active” colloidal suspensions are still largely unexplored. Active suspensions of biological matter, such as motile bacteria or dense mixtures of active actin–motor–protein mixtures have, respectively, reveals superfluid‐like and gel‐like states. Attractive inanimate systems for active matter are chemically self‐propelled particles. It has so far been challenging to use these swimming particles at high enough densities to affect the bulk material properties of the suspension. Here, it is shown that light‐triggered asymmetric titanium dioxide that self‐propel, can be obtained in large quantities, and self‐organize to make a gram‐scale active medium. The suspension shows an activity‐dependent tenfold reversible change in its bulk viscosity. 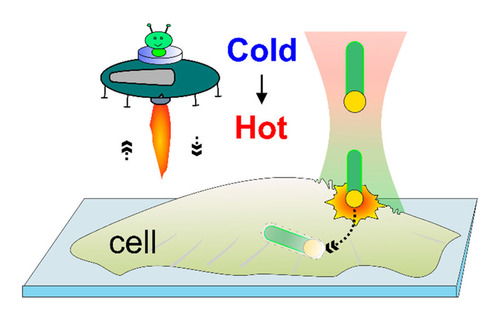 Nano Letters, 18, pages: 7935–7941, November 2018 (article) Accepted
Abstract
Devising strategies for the controlled injection of functional nanoparticles and reagents into living cells paves the way for novel applications in nanosurgery, sensing, and drug delivery. Here, we demonstrate the light-controlled guiding and injection of plasmonic Janus nanopens into living cells. The pens are made of a gold nanoparticle attached to a dielectric alumina shaft. Balancing optical and thermophoretic forces in an optical tweezer allows single Janus nanopens to be trapped and positioned on the surface of living cells. While the optical injection process involves strong heating of the plasmonic side, the temperature of the alumina stays significantly lower, thus allowing the functionalization with fluorescently labeled, single-stranded DNA and, hence, the spatially controlled injection of genetic material with an untethered nanocarrier. 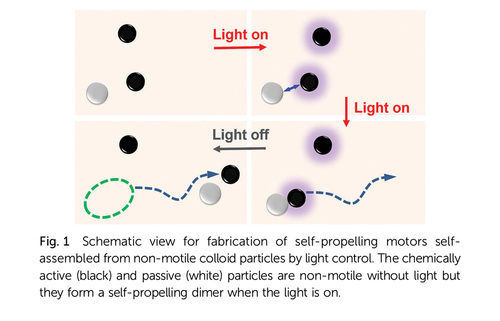 Chem. Comm., 54, pages: 11933-11936, August 2018 (article)
Abstract
Self-propelling chemical motors have thus far required the fabrication of Janus particles with an asymmetric catalyst distribution. Here, we demonstrate that simple, isotropic colloids can spontaneously assemble to yield dimer motors that self-propel. In a mixture of isotropic titanium dioxide colloids with photo-chemical catalytic activity and passive silica colloids, light illumination causes diffusiophoretic attractions between the active and passive particles and leads to the formation of dimers. The dimers constitute a symmetry-broken motor, whose dynamics can be fully controlled by the illumination conditions. Computer simulations reproduce the dynamics of the colloids and are in good agreement with experiments. The current work presents a simple route to obtain large numbers of self-propelling chemical motors from a dispersion of spherically symmetric colloids through spontaneous symmetry breaking. 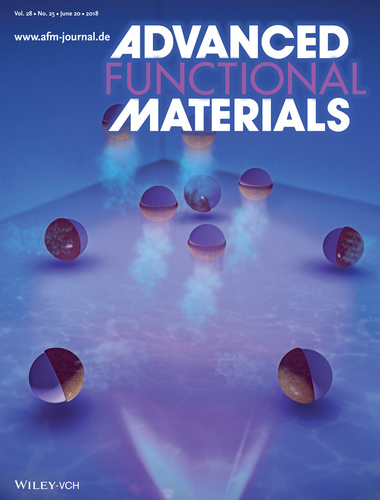 Adv. Func. Mat., 28, pages: 1706660, Febuary 2018 (article)
Abstract
Abstract Phototactic microorganisms are commonly observed to respond to natural sunlight by swimming upward against gravity. This study demonstrates that synthetic photochemically active microswimmers can also swim against gravity. The particles initially sediment and, when illuminated at low light intensities exhibit wall‐bound states of motion near the bottom surface. Upon increasing the intensity of light, the artificial swimmers lift off from the wall and swim against gravity and away from the light source. This motion in the bulk has been further confirmed using holographic microscopy. A theoretical model is presented within the framework of self‐diffusiophoresis, which allows to unequivocally identify the photochemical activity and the phototactic response as key mechanisms in the observed phenomenology. Since the lift‐off threshold intensity depends on the particle size, it can be exploited to selectively address particles with the same density from a polydisperse mixture of active particles and move them in or out of the boundary region. This study provides a simple design strategy to fabricate artificial microswimmers whose two‐ or three‐dimensional swimming behavior can be controlled with light.

Small, 14(7):1702990, Febuary 2018 (article)
Abstract
In this article, a chiral plasmonic hydrogen‐sensing platform using palladium‐based nanohelices is demonstrated. Such 3D chiral nanostructures fabricated by nanoglancing angle deposition exhibit strong circular dichroism both experimentally and theoretically. The chiroptical properties of the palladium nanohelices are altered upon hydrogen uptake and sensitively depend on the hydrogen concentration. Such properties are well suited for remote and spark‐free hydrogen sensing in the flammable range. Hysteresis is reduced, when an increasing amount of gold is utilized in the palladium‐gold hybrid helices. As a result, the linearity of the circular dichroism in response to hydrogen is significantly improved. The chiral plasmonic sensor scheme is of potential interest for hydrogen‐sensing applications, where good linearity and high sensitivity are required. 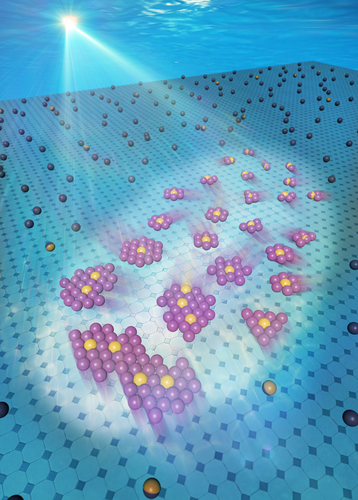 Advanced Materials, 29, pages: 1701328, June 2017, 32 (article)
Abstract
The collective phenomena exhibited by artificial active matter systems present novel routes to fabricating out-of-equilibrium microscale assemblies. Here, the crystallization of passive silica colloids into well-controlled 2D assemblies is shown, which is directed by a small number of self-propelled active colloids. The active colloids are titania–silica Janus particles that are propelled when illuminated by UV light. The strength of the attractive interaction and thus the extent of the assembled clusters can be regulated by the light intensity. A remarkably small number of the active colloids is sufficient to induce the assembly of the dynamic crystals. The approach produces rationally designed colloidal clusters and crystals with controllable sizes, shapes, and symmetries. This multicomponent active matter system offers the possibility of obtaining structures and assemblies that cannot be found in equilibrium systems. 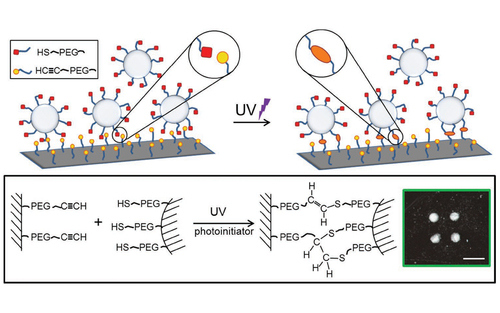 Advanced Materials, 28(44):9846-9850, September 2016 (article)
Abstract
Immobilization of colloidal assemblies onto solid supports via a fast UV-triggered click-reaction is achieved. Transient assemblies of microparticles and colloidal materials can be captured and transferred to solid supports. The technique does not require complex reaction conditions, and is compatible with a variety of particle assembly methods.