Most sophisticated ultrasound fields to date and one shot additive manufacturing 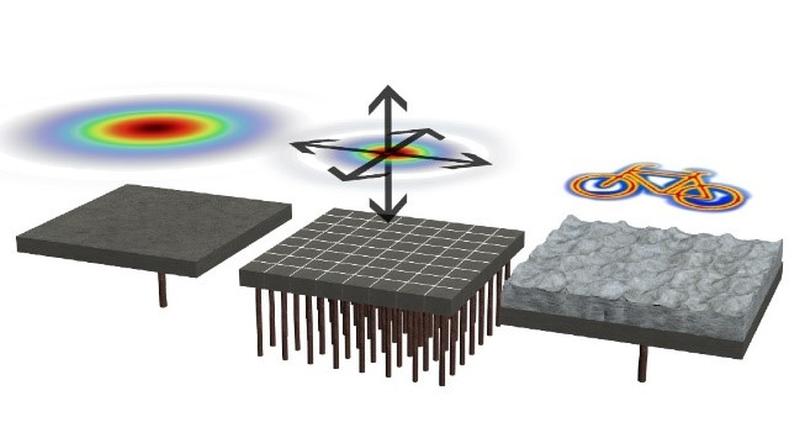 Introduction and problem: Additive manufacturing, such as 3D printing, opens new avenues for mechanical design, as it allows fabrication of geometries not possible with classical subtractive machining. However, established methods are serial and therefore very slow. Why is it not possible to assemble matter in the desired shape “in one shot”? Ultrasound waves are potentially very interesting, as they are benign and versatile and as they allow contact-free particle manipulation over many length scales. Acoustic waves exert forces when they interact with matter, which has been used to trap and levitate individual microparticles and cells. The acoustic contrast between the material and the medium, and the spatial variation of the ultrasound field determine the interaction. Resonators and arrays of a few hundred transducers have thus far been used to generate the sound fields, but the former only yields highly symmetrical pressure patterns, and the latter cannot be scaled to achieve sufficiently complex fields.

Our approach: A radically new approach to generate ultrasound fields with orders of magnitude higher complexity than what has been possible to date, has been invented in our group [1]. We could demonstrate the first acoustic hologram, which is the acoustic analog to the optical kinoform [1]. This a diffractive element that defines the phase of a passing wave at each point across its wavefront. Theoretically it is now possible to achieve up to 100% diffraction efficiency. The device encodes the desired wave front in the thickness distribution of a plastic slab. Due to the difference in the speed of sound between the hologram and the surrounding medium (e.g. fluid) the passing wave will locally lead or lag at each point depending on the local thickness. The phase distribution that is needed to reconstruct an arbitrary target field can be computed by algorithms, that can be based on established optical holography methods and which we adapted to work for physical acoustics.

Results: We designed and fabricated holograms with an aperture of 50 mm aperture, which effectively contains 15,000 pixels, which is one to two orders of magnitude larger than what has been achieved to date using expensive and cumbersome phased array technology. We showed that commercial printers can be used for the rapid fabrication of the diffractive elements (holograms), which means that they can be easily and cheaply made. We then demonstrated parallel assembly of silicone microparticles into complex shapes defined by the projected acoustic image from the hologram (Fig. 1.2). We expanded this further by a chemical fixation method to allow instant fabrication of objects that can be removed from the bath, while the surrounding bulk liquid remains unaffected [2].

Figure 1.2: Acoustic particle assembly and fabrication. (a) Schematic of the experimental setup (side view). (b) Assembly of microparticles to form a dove (top view). (c) Chemical fusion of the particle assembly results in mechanically stable, self-supporting objects (and potentially much faster than 3D printing).

The large DOF of our holograms enables not only control over the scalar amplitude distribution in the acoustic image. It even allows control over the phase, which is the in-plane component of the wave vector. This can be used for advanced and seemingly dynamic object propulsion techniques, such as the surfing particles shown in Fig. 1.3. There the acoustic image is projected onto the water-air interface where the radiation pressure results in crests on the surface. Rubber discs of several millimeters are trapped on the crests due to surface tension. The hologram can now project elongated tracks with a defined phase distribution such that the trapped particles are continuously propelled around the track as long as the sound stays on.

Creating complex acoustic fields also needs a means to experimentally validate those by measurement. The conventional method works by scanning a hydrophone point-by-point through the region of interest and therefore scales badly to obtain full 3D pressure maps. We therefore also developed a very fast method for mapping 3D sound fields using a thin membrane that is continuously observed by a thermal camera [3]. The evolution of its surface temperature can provide the pressure map of large volumes – orders of magnitude faster than what is possible with a hydrophone. 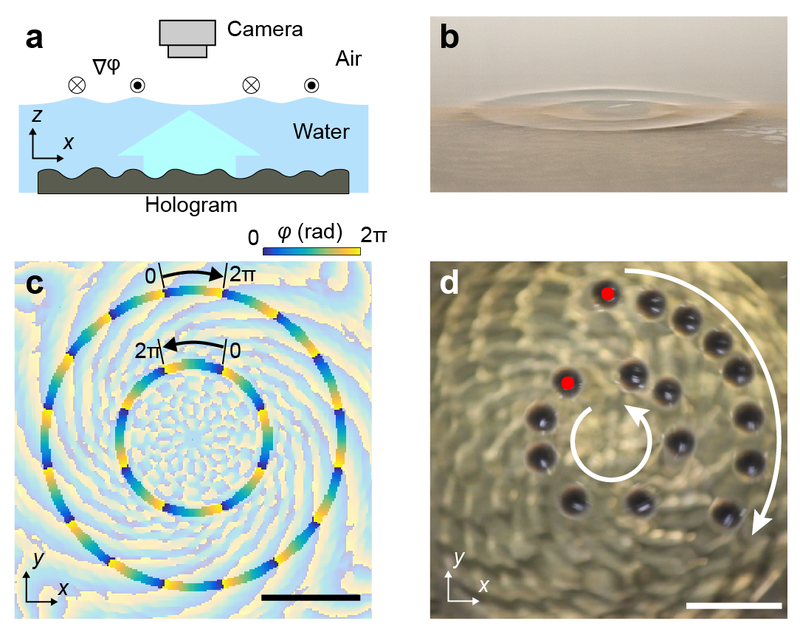 Figure 1.3: Acoustic propulsion of objects along closed tracks with opposing directions. (a) Schematic of the setup (side view). (b) Photo of the water crests. (c) Simulated phase distribution. (d) Time-lapse image showing motion of discs.

Discussion and Outlook: The advanced control over ultrasound fields – enabled by acoustic holograms – is a major advance for ultrasound research, useful for manifold applications in science, medicine and industry. Holography is a general concept and the algorithms and processes we develop are not limited to static diffractive elements. They can be applied to phased arrays if devices with larger DOF become available. We filed two patent applications on acoustic fabrication and medical therapy, respectively. Parts of this work have been reported as letters to Nature, Advanced Materials, and Applied Physics Letters and received considerable attention in the media and the scientific community. In 2018 this project was awarded two major grants: An ERC Advanced Grant (HoloMan, 2019-2023). We further received a Max Planck - Fraunhofer cooperation grant (Akustogramme, 2018-2022) in collaboration with the Empirical Inference Department at the MPI-IS and the Fraunhofer Institute for Biomedical Engineering. 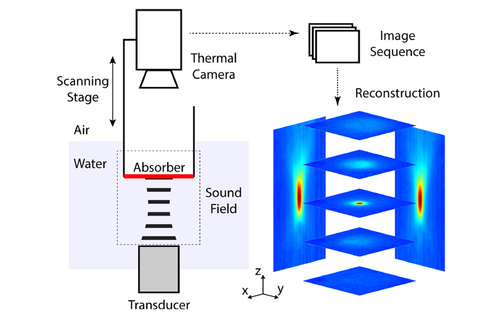 Applied Physics Letters, 113(13):133503, September 2018 (article)
Abstract
We propose and demonstrate a thermographic method that allows rapid scanning of ultrasound fields in a volume to yield 3D maps of the sound intensity. A thin sound-absorbing membrane is continuously translated through a volume of interest while a thermal camera records the evolution of its surface temperature. The temperature rise is a function of the absorbed sound intensity, such that the thermal image sequence can be combined to reveal the sound intensity distribution in the traversed volume. We demonstrate the mapping of ultrasound fields, which is several orders of magnitude faster than scanning with a hydrophone. Our results are in very good agreement with theoretical simulations. 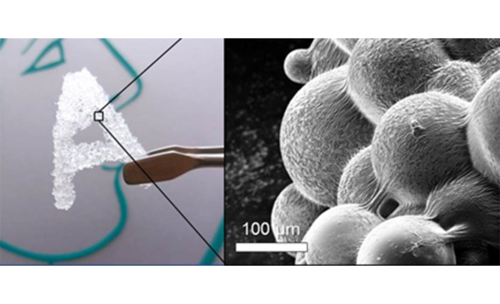 Acoustic Fabrication via the Assembly and Fusion of Particles

Advanced Materials, 30(3):1704507, January 2018 (article)
Abstract
Acoustic assembly promises a route toward rapid parallel fabrication of whole objects directly from solution. This study reports the contact-free and maskless assembly, and fixing of silicone particles into arbitrary 2D shapes using ultrasound fields. Ultrasound passes through an acoustic hologram to form a target image. The particles assemble from a suspension along lines of high pressure in the image due to acoustic radiation forces and are then fixed (crosslinked) in a UV-triggered reaction. For this, the particles are loaded with a photoinitiator by solvent-induced swelling. This localizes the reaction and allows the bulk suspension to be reused. The final fabricated parts are mechanically stable and self-supporting. 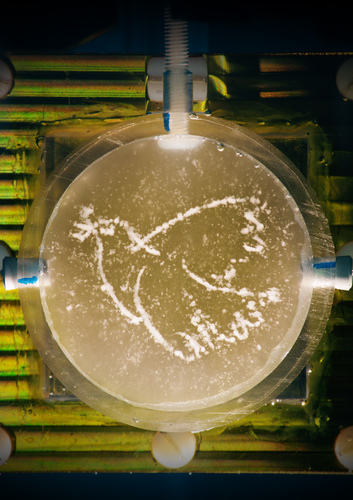 Nature, 537, pages: 518-522, September 2016, Max Planck press release, Nature News & Views, Nature Video. (article)
Abstract
Holographic techniques are fundamental to applications such as volumetric displays(1), high-density data storage and optical tweezers that require spatial control of intricate optical(2) or acoustic fields(3,4) within a three-dimensional volume. The basis of holography is spatial storage of the phase and/or amplitude profile of the desired wavefront(5,6) in a manner that allows that wavefront to be reconstructed by interference when the hologram is illuminated with a suitable coherent source. Modern computer-generated holography(7) skips the process of recording a hologram from a physical scene, and instead calculates the required phase profile before rendering it for reconstruction. In ultrasound applications, the phase profile is typically generated by discrete and independently driven ultrasound sources(3,4,8-12); however, these can only be used in small numbers, which limits the complexity or degrees of freedom that can be attained in the wavefront. Here we introduce monolithic acoustic holograms, which can reconstruct diffraction-limited acoustic pressure fields and thus arbitrary ultrasound beams. We use rapid fabrication to craft the holograms and achieve reconstruction degrees of freedom two orders of magnitude higher than commercial phased array sources. The technique is inexpensive, appropriate for both transmission and reflection elements, and scales well to higher information content, larger aperture size and higher power. The complex three-dimensional pressure and phase distributions produced by these acoustic holograms allow us to demonstrate new approaches to controlled ultrasonic manipulation of solids in water, and of liquids and solids in air. We expect that acoustic holograms will enable new capabilities in beam-steering and the contactless transfer of power, improve medical imaging, and drive new applications of ultrasound.