New wireless ultrasonic actuator and its application in miniaturized endoscopy

Figure 2.1: Schematic of the miniaturized endoscope driven wirelessly by ultrasound. A surface is microfabricated (c) such that it supports an array of micro-bubbles. The oscillation of the air-liquid interface at the bubble surface causes liquid streaming and thus generates a propulsion force (due to the recoil) on the device (b). The robot arm can now be powered and moved wirelessly to position a camera (a). The robot arm is only 1mm in diameter and thus much smaller than current endoscopes.

Introduction and problem: Endoscopy enables minimally invasive procedures in many medical fields, such as urology. However, current endoscopes are normally cable-driven, which limits their dexterity and makes them hard to miniaturize. Indeed, current urological endoscopes have an outer diameter of about 3 mm and still only possess one bending degree of freedom. In order to avoid anesthesia and to enable routine inspections, it would be advantageous to develop an endoscopic camera arm that needs no cables or wires. Is it possible to actuate an endoscope that is smaller than existing endoscopes? This calls for a new kind of actuator – one that has a simple structure and is powered wirelessly such that it can be miniaturized and integrated more efficiently.

Ultrasound has been widely used in medicine and it has also been proposed as a means to transfer power wirelessly. However, common approaches first convert mechanical vibrations to electrical power using the piezoelectric effect, and then in a second step utilize the electricity to power a device. This conversion process adds additional complexity and suffers from low efficiency. In this project, we have developed a wireless miniaturized actuator that can directly convert ultrasound into mechanical work. We apply our new, patented actuation scheme to build the first ultrasound powered endoscope.

Our approach: Our idea is to design functional surfaces that are excited by ultrasound and directly generate a force. For this we exploit acoustic streaming, where a resonant bubble can cause fast fluid flow. We fabricate surfaces that contain thousands of resonant microbubbles, which we show can actuate a millimeter-scale robot arm in a fluid (Fig. 2.1). We demonstrate that under resonant ultrasound excitation, the functional surface, which we call a Bubble Array Streaming Surface (BASS), generates a strong streaming flow, and thus provides a propulsive force that can be used for actuation. We achieve independent control of different BASS surfaces by frequency-division multiplexing, which allows us to develop a robot arm with many degrees of freedom. We also develop a method to increase the force of the actuator, such that the BASS actuator can even propel mini-robots at the centimeter-scale.

Figure 2.2: (a) Comparison of a commercial endoscope (left) with our ultrasonic mini-arm (middle) and the flexible endoscope (right). (b) Microscope image of the active surface under water, which consists of an array of micro-bubbles.

Results: The functional surfaces, consisting of two-dimensional arrays of cylindrical cavities, were fabricated by a photolithography process. When remotely powered by an acoustic field, the surfaces provide highly directional propulsive forces in fluids via acoustic streaming. The size of the microcavities and hence bubbles determines the resonance frequency. This can be exploited to independently address different surfaces, simply by changing the frequency of the ultrasound. We easily obtain more than 10 degrees of freedom, thus permitting the wireless actuation of a complex motion of a flexible endoscope, which has a diameter of only ~1 mm (Fig. 2.2a).

The flexible endoscope successfully performed an endoscopic examination in both a high-fidelity kidney phantom that we developed in our lab [1], as well as in a rabbit bladder ex vivo (Fig. 2.3) [4]. The flexible endoscope entered the tool channel of a rigid cystoscope, and was pointing downwards, the structure of the fat tissue can be seen as a marker (image at 0s in Fig. 2.3). When the ultrasound is applied, streaming from the active surface bends the flexible endoscope arm to the right (3 s in Fig. 2.3). A blood vessel on the bladder sidewall is clearly visualized by a 1x1mm camera. 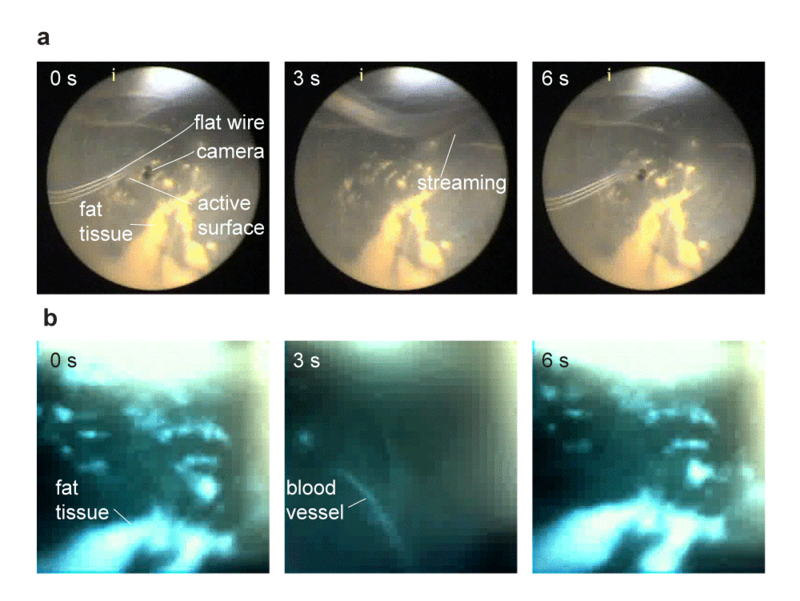 Discussion and Outlook: We developed a novel functional surface that is wirelessly powered by ultrasound in water and permits the actuation of miniaturized, multiple degrees-of-freedom endoscopes and robot-arms. The functional surfaces consist of arrays of micro-bubbles. Streaming can be induced with standard ultrasound sources from the outside, which ensures wireless operation. The surfaces can readily be integrated in devices. In contrast to bulk actuators, no specific consideration is needed for the mechanical coupling and integration of the surface actuators, which also minimizes the volume and weight required for actuation, thus making them particularly well-suited for miniaturization. Moreover, if the surface actuators are made of a thin polymeric material, they can also be soft and compliant with complex three-dimensional object. The adoption of micro-structured surfaces as wireless actuators opens new possibilities in the development of miniaturized devices and tools for fluidic environments that are accessible by low intensity ultrasound fields. The miniaturized endoscope arm we developed promises a significant reduction of surgical trauma and thus reduces unwanted complications for the patient. 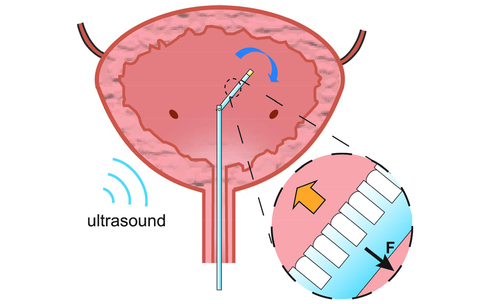 ACS Applied Materials & Interfaces, 9(49):42536 - 42543, November 2017 (article)
Abstract
Endoscopy enables minimally invasive procedures in many medical fields, such as urology. However, current endoscopes are normally cable-driven, which limits their dexterity and makes them hard to miniaturize. Indeed current urological endoscopes have an outer diameter of about 3 mm and still only possess one bending degree of freedom. In this paper, we report a novel wireless actuation mechanism that increases the dexterity and that permits the miniaturization of a urological endoscope. The novel actuator consists of thin active surfaces that can be readily attached to any device and are wirelessly powered by ultrasound. The surfaces consist of two-dimensional arrays of micro-bubbles, which oscillate under ultrasound excitation and thereby generate an acoustic streaming force. Bubbles of different sizes are addressed by their unique resonance frequency, thus multiple degrees of freedom can readily be incorporated. Two active miniaturized devices (with a side length of around 1 mm) are demonstrated: a miniaturized mechanical arm that realizes two degrees of freedom, and a flexible endoscope prototype equipped with a camera at the tip. With the flexible endoscope, an active endoscopic examination is successfully performed in a rabbit bladder. This results show the potential medical applicability of surface actuators wirelessly powered by ultrasound penetrating through biological tissues. 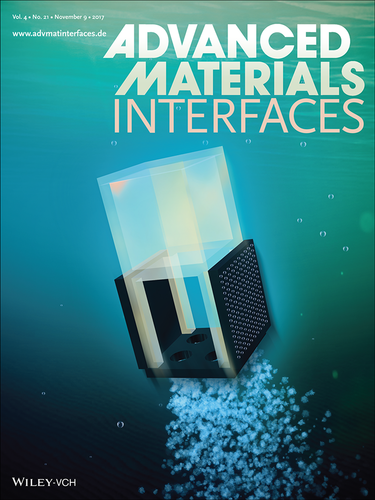 Active Acoustic Surfaces Enable the Propulsion of a Wireless Robot

Advanced Materials Interfaces, 4(21):1700933, September 2017 (article)
Abstract
A major challenge that prevents the miniaturization of mechanically actuated systems is the lack of suitable methods that permit the efficient transfer of power to small scales. Acoustic energy holds great potential, as it is wireless, penetrates deep into biological tissues, and the mechanical vibrations can be directly converted into directional forces. Recently, active acoustic surfaces are developed that consist of 2D arrays of microcavities holding microbubbles that can be excited with an external acoustic field. At resonance, the surfaces give rise to acoustic streaming and thus provide a highly directional propulsive force. Here, this study advances these wireless surface actuators by studying their force output as the size of the bubble-array is increased. In particular, a general method is reported to dramatically improve the propulsive force, demonstrating that the surface actuators are actually able to propel centimeter-scale devices. To prove the flexibility of the functional surfaces as wireless ready-to-attach actuator, a mobile mini-robot capable of propulsion in water along multiple directions is presented. This work paves the way toward effectively exploiting acoustic surfaces as a novel wireless actuation scheme at small scales. 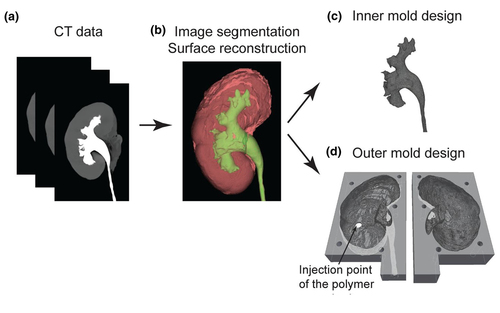 Soft 3D-Printed Phantom of the Human Kidney with Collecting System

Ann. of Biomed. Eng., 45(4):963-972, April 2017 (article)
Abstract
Organ models are used for planning and simulation of operations, developing new surgical instruments, and training purposes. There is a substantial demand for in vitro organ phantoms, especially in urological surgery. Animal models and existing simulator systems poorly mimic the detailed morphology and the physical properties of human organs. In this paper, we report a novel fabrication process to make a human kidney phantom with realistic anatomical structures and physical properties. The detailed anatomical structure was directly acquired from high resolution CT data sets of human cadaveric kidneys. The soft phantoms were constructed using a novel technique that combines 3D wax printing and polymer molding. Anatomical details and material properties of the phantoms were validated in detail by CT scan, ultrasound, and endoscopy. CT reconstruction, ultrasound examination, and endoscopy showed that the designed phantom mimics a real kidney's detailed anatomy and correctly corresponds to the targeted human cadaver's upper urinary tract. Soft materials with a tensile modulus of 0.8-1.5 MPa as well as biocompatible hydrogels were used to mimic human kidney tissues. We developed a method of constructing 3D organ models from medical imaging data using a 3D wax printing and molding process. This method is cost-effective means for obtaining a reproducible and robust model suitable for surgical simulation and training purposes.

Appl. Phys. Lett., 109(19):191602, November 2016, APL Editor's pick. APL News. (article)
Abstract
Miniaturization calls for micro-actuators that can be powered wirelessly and addressed individually. Here, we develop functional surfaces consisting of arrays of acoustically resonant microcavities, and we demonstrate their application as two-dimensional wireless actuators. When remotely powered by an acoustic field, the surfaces provide highly directional propulsive forces in fluids through acoustic streaming. A maximal force of similar to 0.45mN is measured on a 4 x 4 mm(2) functional surface. The response of the surfaces with bubbles of different sizes is characterized experimentally. This shows a marked peak around the micro-bubbles' resonance frequency, as estimated by both an analytical model and numerical simulations. The strong frequency dependence can be exploited to address different surfaces with different acoustic frequencies, thus achieving wireless actuation with multiple degrees of freedom. The use of the functional surfaces as wireless ready-to-attach actuators is demonstrated by implementing a wireless and bidirectional miniaturized rotary motor, which is 2.6 x 2.6 x 5 mm(3) in size and generates a stall torque of similar to 0.5 mN.mm. The adoption of micro-structured surfaces as wireless actuators opens new possibilities in the development of miniaturized devices and tools for fluidic environments that are accessible by low intensity ultrasound fields.