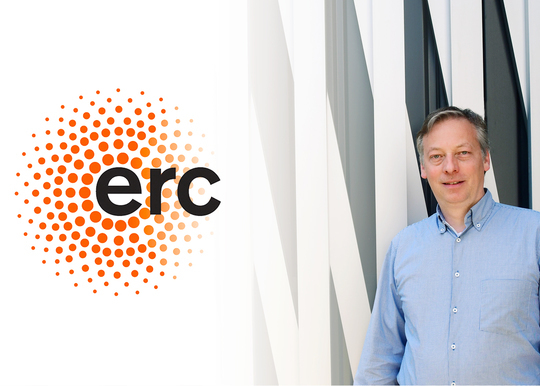 The head of the Micro, Nano and Molecular Systems Lab at the Max Planck Institute for Intelligent Systems and Professor of Physical Chemistry at the University of Stuttgart receives 2.5 Mio Euro from the European Research Council (ERC), which funds cutting-edge research in all disciplines.

ERC Advanced Grants are awarded to established researchers with a proven track record of excellence. Applicants must be exceptional leaders in terms of originality and significance of their research contributions. The prestigious grants provide 5 years of funding to undertake ground-breaking, high-risk research.

In the ERC Advanced Grant project “Holographic acoustic assembly and manipulation (Holoman)” Peer Fischer and his team will pursue the ambitious goal to use sound to assemble objects, including potentially entire organoids, in one shot and much faster than 3D printing.

Acoustic waves exert forces when they interact with matter. Sound, and in particular ultrasound, which has a wavelength of a few hundred microns in water, is a benign tool, that is used for medical imaging and that has been successfully employed to manipulate, trap and levitate microparticles and cells. The acoustic contrast between the material and the medium, and the spatial variation of the ultrasound field determine the interaction. Resonators and arrays of a few hundred transducers have thus far been used to generate the sound fields, but the former only yields highly symmetrical pressure patterns, and the latter cannot be scaled to achieve complex fields. “We have reported a radically new approach to shape ultrasound fields – using a hologram – which is a route towards truly sophisticated 3D sound fields with orders of magnitude higher complexity than what has been possible to date”, says Peer Fischer (www.nature.com/articles/nature19755). The basis of the team’s invention is explained in the following video:

“I am excited to receive the ERC Advanced Grant and I see it as a recognition of our work”, says Peer Fischer. “What lies ahead is very challenging, and the grant gives us the freedom and long term funding for our research”. Peer Fischer and his team will develop the technology, materials, processes, and theory needed for the generation of 3D ultrasound fields, which opens up entirely new possibilities in physical acoustics and the manipulation of matter with sound, therapeutics, and the controlled propulsion of microbots through tissues for medical applications.

Professor Peer Fischer studied physics at Imperial College London and gained his Ph.D. at the University of Cambridge. He was a NATO (DAAD) Postdoctoral Fellow at Cornell University, before joining the Rowland Institute at Harvard. At Harvard he held a Rowland Fellowship and directed an interdisciplinary research lab for five years. In 2009 he received an Attract Award from the Fraunhofer Society which led him to set up a photonics lab at the Fraunhofer Institute for Physical Measurement Techniques in Freiburg. In 2011 he moved his lab to the Max Planck Institute for Intelligent Systems in Stuttgart. Since 2013 he is a Professor at the University of Stuttgart. He received his first ERC Grant in 2011. In 2016 he won a World Technology Award in the category “IT Hardware”, which is awarded for "innovative work with most likely long-term significance" for humanity. Peer Fischer is a Founding Editorial Board Member of the journal Science Robotics and a Fellow of the Royal Society of Chemistry.

The European Research Council, set up by the European Union in 2007, is the first European funding organisation for excellent frontier research. Every year, it selects and funds the very best, creative researchers of any nationality and age, to run projects based in Europe.

ERC Advanced Grants can be obtained by established and active researchers with a high track record in the past 10 years, and who want long-term funding to pursue a ground-breaking, high-risk project. For the ERC to grant a sum of up to 2.5 million Euros for a period of 5 years, applicants must be exceptional leaders in terms of originality and significance of their research contributions. With the help of the grant, the individual researcher can employ other researchers of any nationality as team members. It is also possible to have one or more team members located in a non-European country.

2,167 research proposals were submitted this time, out of which 12% were selected for funding. This EU funding, worth a total of €653 million, will benefit 269 senior researchers across Europe, of which Peer Fischer is one of them, giving him a chance to realise his and his team´s most creative ideas and potentially produce results that will have a major impact on science, society and the economy. Female researchers submitted approximately 17% of proposals and some 17% of grants have been awarded to women.